You have to dream before the dream comes true.

Despite the fact that Dr. Abdul Kalam was raised in a poor financial condition, he had a strong desire to learn and gain knowledge. He supported his family by selling newspapers at an early age.  Along with being the helping hand in the family, he worked hard in studies. Dr. Kalam became a world- renowned scientist, a teacher and a celebrated author. But above all, he was a great motivator. He always wanted children to be productive and practise innovative thinking.

For four decades, he was a scientist at DRDO and ISRO. He also acted as the scientific advisor to the Prime Minister of India. Later, he became the 11th President of India, for the tenure of 5 years from 2002  to 2007. He was the first bachelor and vegetarian President of India. Dr. Abdul Kalam was very down to earth and an inspirational figure worldwide.

Dr. Abdul Kalam missed his dream to become a fighter pilot, as there were eight vacancies in IAF and he was in the ninth position. But, this dream of his was achieved during his Presidency. The first Indian President to fly a fighter plane was Dr. APJ Abdul Kalam.

Dr. Abdul Kalam is also said to be the father of India’s missile program because of his contribution towards the development and operationalization of Agni and Prithvi missiles. He is still popularly remembered as the Missile Man of India.

Dr. Abdul Kalam played a major role in making India a nuclear power. His organizational, political and technical contributions were behind the success of Pokhran II tests in 1998. Being one of the best known nuclear scientist, Dr. Abdul Kalam was also admired worldwide.

Dr. Abdul Kalam was also commonly known as the People’s President, because of his love and care for everyone, be it a rich or a poor, young or old. Those who met and interreacted with Dr. Kalam were floored by his humble nature.

After his presidential term, he became the visiting professor at IIMs and other institutes. He also travelled to various remote places of the country to inspire people for studies and motivate them to follow their dreams.

He received honorary doctorates from 48 universities and institutions from India and abroad. He was also conferred upon India’s highest civilian award, the Bharat Ratna. The tally of honors received by Dr. Kalam is long, including: 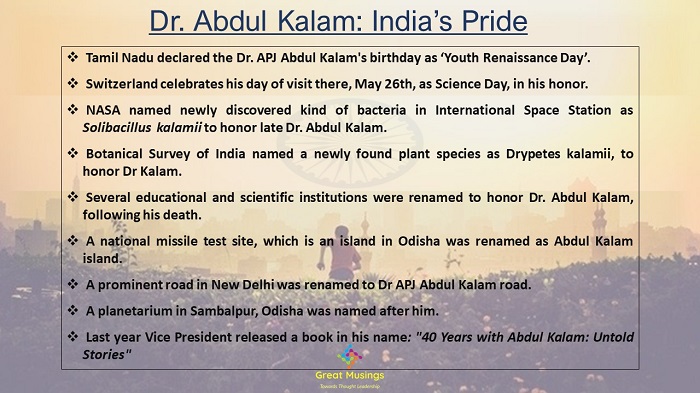 Dr. Abdul Kalam wrote many inspiring books. Out of 25 books written by him, 10 inspirational ones are suggested below:

After his sudden demise at Shillong on 27th July 2015, we lost a great Indian leader and an extraordinary teacher. He was laid to rest at Pei Karumbu, Rameswaram on 30th July 2015.

Dr. Abdul Kalam always wanted to be remembered as a ‘Teacher’. Opportunely, his last moments were with students. On 25th July, 2015, he went to deliver a lecture to students at IIM, Shillong. Within a few minutes of starting his lecture, he collapsed on the stage due to cardiac arrest. The whole nation was shocked and saddened due to this sudden loss of one of the most respected and loved leader.

Dr. Kalam never owned a television. He was a man of ‘Simple Living and High Thinking’. He inspired millions to think big. He will keep inspiring us through his deep and Great Musings. His inspirational teachings will help you throughout your journey of life. 20 of his best quotes selected for you: 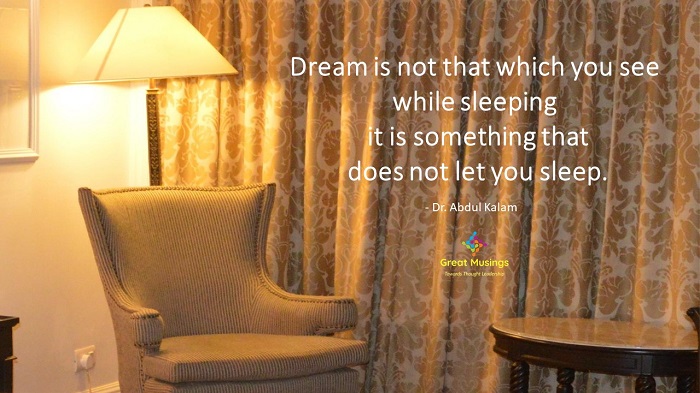 Give wings to the fire in you. Spread the goodness. Let the world receive the nobility of your deeds.

Here’s a visual quote book on Dr. APJ Abdul Kalam to get inspired:

How Disruptive Technologies Are Empowering The World!