“You control your own life. Your own will is extremely powerful.”

Rowling suffered domestic abuse, her marriage failed, she was jobless with a dependent child, was homeless and lived on state benefits. But she transformed her struggling and depressing life to world’s first billionaire author. She was once wealthier than the Queen of England. But lost her billionaire status when she gave away over US $160 million to charity.

The best-selling book series in history, Harry Potter, made Rowling the first person to become a billionaire solely through writing. But that too wasn’t so smooth. Her manuscript was rejected by 12 publishers before Bloomsbury published it. Ideas of Harry Potter’s script was written on a napkin in a train to London in 1990. Most of the  story of Harry Potter is inspired from her life’s circumstances. The characters are created based on her life and people around her. For example, soul-sucking creatures, Dementors, were inspired from her illness. But Rowling ended the Harry Potter series with the positive words “All was well”.

J K Rowling no longer minds mispronunciation of her name. Her name rhymes with “bowling” not “howling”. She turned negativities in her life to positive ones and quoted: 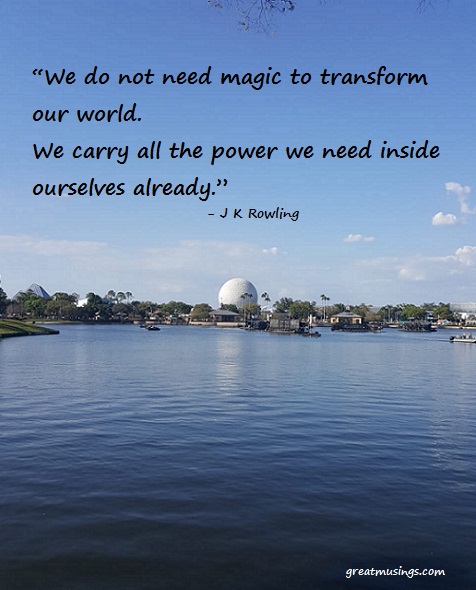 Life is tough. You cannot change your past, but you have all the power to change your future. Imagination is one of the means to transform odds into even.

Narayana Murthy on Growth and Change