After the 4th generation of data technology for cellular networks became operational, quite a few statements have been made about the importance of data. In my last post, I have talked about Artificial Intelligence. AI algorithms needs data to train on so as to become intelligent. This post focuses on the importance of data and its possible role in the fourth Industrial Revolution . In this post, the term ‘Oil’ has been liberally used for fuel.

The Quest for Innovation

Right from the ancient times, human race has been searching for new ways of doing things. This quest for innovation is responsible for all that we see and experience today. We moved from weapons made out of stone to the very sophisticated nuclear technology with massive potential for destruction and so on. While it was going on for ages, the speed of innovation got a big push with the first industrial revolution in the later part of 18th century and early part of 19th century.

The development of steam engine was one of the most important factors that gave the push to first Industrial Revolution. The supporting factor, however, was the underlying energy source that was used to heat water to convert it to steam and power the engine. This energy source was a mixture of wood and coal (the oil of that era). So the power of steam fuelled by the ‘Oil’ and coupled with mechanization pushed the limits of productivity and imagination and paved the road for today’s world.

The second Industrial Revolution occurred between later part of 19th century and early part of 20th century. This was the period that saw emergence of assembly lines and mass production systems. By this time, the oil industry was well established and electricity had taken over from the old wood and coal to power the factories. While the production was supported by electricity, oil was playing a much important role in the form of running vehicles.

With the prominence of computers and advancement in mechanical systems came the third Industrial Revolution. This started in the second half of the 20th century and is still continuing. Digital technology forms the backbone of the third industrial revolution. Electricity, like earlier, is still playing a very important role with operational support provided by the information and communication technologies. With increased industrial activity, the importance and consumption of oil has only increased and it is still playing a very important role in running the world economy.

Industry experts are talking about the fourth Industrial Revolution which is about the pervasiveness of digital technology. This is an advancement (already in the process) that makes use of IoT, Cloud Computing, Analytics and AI to have a massive network of connected industrial setup. This setup is aimed at bridging the gap between the traditional physical assets and the digital technologies.

There is a digital counterpart of the whole physical system available all the time. The interaction between the digital and physical systems facilitates autonomous detection of problems and course correction on an as needed basis.

The World Is Changing Fast

Along with the electricity (which also in some cases is generated from the ‘Oil’ through thermal power stations) Oil has been powering the world economy. Oil has also been playing a role in connecting different sections of the industry. But, the consumption of ‘Oil’ has a big impact on the environment. Slowly, the world has realised and recognising this impact and there has been a push to replace ‘Oil’ as a fuel.

India has announced a major campaign to increase the adoption of electric vehicles. Automobile companies all around the world are focusing on the development and production of electric vehicles. There has been an effort to move to renewable sources of energy at a global level. In the next few decades, the world will see reduced importance of ‘Oil’.

The Role of Data

Industry 4.0 is completely based on data. It is about having the data of the product right from its conception to its end of life. This includes the data on various aspects of performance of the product in question. The performance data was never available earlier, in its entirety. The data created and collected in different phases of a product’s lifecycle will have the whole story of the product and will facilitate connections between different sections of the industry. This whole story will help identify and fix the root cause of a problem the product runs into. 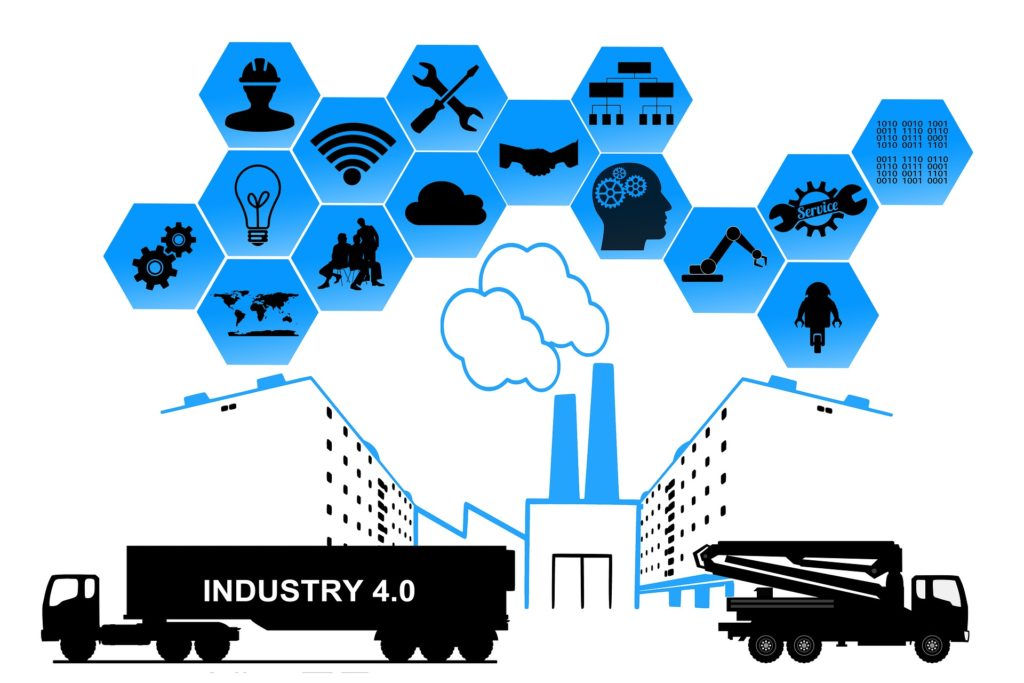 The operation of the product and the production setup that created it generates a huge amount of data. The analysis of this data will provide a direct understanding on the aspects of product design and/or production that impact its performance. Over time, more businesses will be looking for a product development service that utilizes data in order to create the best possible product that will make a big impact in the industry. Thus improvement of the product(s) will be based more on sound facts rather than judgement (or intuition).

The speed of innovation is directly related to the number of connections between various actors/entities in a system. With Industry 4.0, the data will connect different industrial aspects of product to facilitate better innovation.

Previous Industrial Revolutions were powered by traditional mechanical engines running on the ‘Oil’. Industry 4.0 will be powered by Virtual Engines that will use Data as their fuel. This network of cyber physical systems will use electric power to breathe and data will become its lifeblood.

As the ‘Oil’ gets consumed, its quantity decreases with time, but, the amount of Data keeps increasing with time as the systems and processes keep creating new Data. Data being a human creation can be generated at will. Unlike the ‘Oil’, Data can be copied and used by multiple systems at the same time. The fact that data does not have the environmental penalty associated with its production and consumption, is a bonus.

So, it can be concluded that Data isn’t just the new ‘Oil’, but, a more enhanced avatar of ‘Oil’ that can fuel the 4th Industrial Revolution.